Trying to keep a blog?
I think my expectations for myself have been too high. I’m setting them realllly low. Not going to try for engaging, quality writing or anything like that.
Just going to toss in notes here and there about whatever I encounter that I want to share.

Lately I’ve been a little obsessed with reading novels and watching films set in the WWI era. It’s no surprise that there is such an avalanche of creative output based on a uniquely horrific mass slaughter the likes of which the world had never seen.

You only have until May 22 to watch the first episode for free, and May 29 for episode 2.
VERY DARK and gritty WWI battle sequences and a touching, if painful romance. This series really brings home the not-to-be-forgotten fact that war is hell, and WWI was a special, hideous hell–with reverberations still very keenly felt in the UK. If you are interested in this era, there is a wonderful mystery series set in the years just following WWI, and featuring psychologist and investigator Maisie Dobbs–a women deeply affected by the horrors of the war. The author, Jaqueline Winspear, has taken great pains with historical detail and you can read more about this author and the series here: http://www.jacquelinewinspear.com/maisie-dobbs-world.php

There is another fantastic BBC miniseries (isn’t there always?) set in the 1930s in rural England, and many of the characters have been catastrophically damaged by The Great War, and struggle with these losses and wounds even as storm clouds of war loom on the horizon of the coming years. This one, South Riding, based on the books of Winifred Holtby

are previewed here: http://video.pbs.org/video/1900084603 aired last May so is not available for free viewing on the PBS site. I purchased the episodes quite cheaply on Amazon and I loved watching them in sequence after Birdsong. 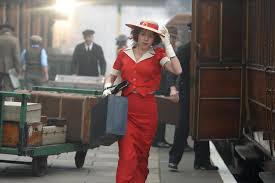 I am a huge fan of the actress Anna Maxwell Martin, who stars as Sarah Burton, a visionary educator who takes on the administration of a down-at-the-heels rural school for girls and gets more adventure then she bargained for.

I hope this entry helps someone discover some meaningful and thought-provoking entertainment.
Advertisement