OK, I admit it. I arrived at the classroom in an uncommonly peevish humor. Churlish. Acrimonious, even.

For one thing, an unprecedented surge in enrollment has thrown our once sedate, orderly community college car owners into a state of depravity and utter lawlessness. I’m talking about our parking lots. 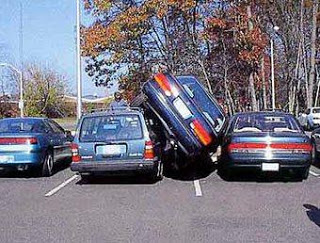 Arriving shortly before class, I noted a fellow faculty member preparing to back his car out of a spot within reasonable walking distance of my classroom. Laden with two fat satchels full of magazines for my students’ advertising analysis project, this mattered to me more than usual. I assumed the polite but obvious position universally recognized as “waiting for the parking spot to be vacated”.
Just as the occupant of my chosen space backed out, and I prepared to pull in, a huge van zoomed right up and nearly collided with me, racing me to the space. The college student behind the wheel was looking directly at me. Daring me. He blinked. I didn’t. Aggressively revving his ill-maintained engine, he darted off in search of other prey.

I decided to check my cell phone messages before turning off my ringer and entering the classroom, so I sat in the car for just a moment–long enough for two other students to swing into place head-to-head, waiting for a game of chicken when I pulled out. Glaring at me, because I was NOT pulling out. When the nearest started yelling and gesturing, I opened my door, stood up, and said “I’M NOT LEAVING!”. Zoom zoom. More hostile exhaust and spray of gravel.

Entering the building, I found the classroom still occupied by the class that meets prior to mine, so I plopped my enormous bag next to me on a bench and began to sort class materials.

Shortly, one of my students, a perfectly able-bodied teenager, stomped into the building and up to my seat, “I want to sit there!”. Not “excuse me, is there room on this bench?” or “would it be OK if I moved your bag”? I was so stunned I actually gathered up all of my materials, stood up, and gave her my seat.
Class went fairly smoothly for the first half-hour, despite the usual couple of clueless students, who refuse to exert themselves by consulting the syllabus or reading my emails, loudly proclaiming that they had no idea their project ideas were due two weeks ago; another announced, with arms crossed and a “what are you going to do about it” expression, that he had decided not to purchase the (reasonably-priced) textbook and, consequently, had not done any of the readings to date.
Okay……..

On to the portion of the class that GenY students are reputed to ENJOY–stimulating, image-rich, video content! Today’s selection was Jean Kilbourne’s phenomenal “Slim Hopes”, a documentary concerning the effects of advertising images on the health and self-concept of women. Since we are currently studying ad analysis, and the upcoming projects will involve presentation of visual images used in print ads, this was a particularly relevant item of instructional content.
Not long into the film I noted that two students were assiduously plunking away at their laptops, completely ignoring the video. Like most instructors, I have had to develop a clear, uncompromising policy against the use of electronic media during class, because many students have no common sense or ability to self-monitor the use of these devices.
.

I decided not to interrupt the film. When it concluded, I announced that the two students who were using their laptops during the film needed to remain in the room so I could repeat the film for their viewing sans AIM, and the rest of the class could be dismissed. I calmly reiterated my policy, and the reason for my policy, and noticed that one of the offending students was mocking me in evil ventriloquist fashion WHILE I was explaining this. The other chat addict burst out that I was being completely unfair because she had LISTENED to the entire video!
Just to reiterate: the documentary was an in-depth analysis of VISUAL images.
Both students muttered and argued during the 25 minutes of the video replay for which they were “forced” to remain.
Later today, I learned from my department chair that there is no student civility policy “as such”, and that, furthermore, faculty are not permitted to drop students from their classes.
As a follow-up, I did a bit of reading about the epidemic of rudeness in “GenY”. There were lots and lots of links. I collected a few, and then I found I was getting far too depressed, so I took a nap.

One thought on “Civility, where art thou?”